When we encounter glomerulonephritis of antineutrophil cytoplasmic antibody (ANCA)-associated vasculitides demonstrating many plasma cell infiltrations, histological overlapping of immunoglobulin G4-related disease (IgG4-RD) often comes into the differential diagnosis. No previous study has focused on the degree of plasma cells in the kidney infiltrate in ANCA-associated glomerulonephritis (ANCA-GN), and the significance of massive plasma cell infiltrate has not been investigated.

To clarify the plasma cell ratio in renal biopsy specimens of ANCA-GN and the histological characteristic of “plasma cell-rich” ANCA-GN, 20 cases of ANCA-GN were reviewed and clinicopathologically analyzed.

Plasma cell ratio was widely distributed between 1.4 and 81%, and the median ratio was 10%. Three patients were categorized in “plasma cell-rich” ANCA-GN, defined as over 45% plasma cell ratio. They tended to include many active glomerular lesions compared to chronic lesions and to display severe tubulointerstitial inflammation. It is suggested that plasma cell-rich ANCA-GN may be acute onset of the disease, and the target of early inflammation may also be in the tubulointerstitial region. Two of the three plasma cell-rich ANCA-GN cases demonstrated numerous IgG4+ cells, but no bird’s-eye pattern fibrosis or obliterative phlebitis.

Plasma cell-rich ANCA-GN is not rare and demonstrates distinct clinicopathological characteristics. This study also reminds us that the presence of the significant number of plasma cells in ANCA-GN, as such, is not a histological diagnostic basis for overlap ANCA-GN and IgG4-related disease.
Anzeige 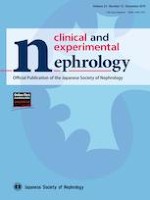 A clinicopathological comparison between IgA nephropathy and Henoch–Schönlein purpura nephritis in children: use of the Oxford classification