In acute myeloid leukemia (AML), patients may harbor pre-leukemic hematopoietic stem cells (HSCs) containing some, but not all, of the mutations observed in the leukemic cells. These pre-leukemic HSCs may survive induction chemotherapy and contribute to AML relapse by obtaining additional mutations. We report here an acute monoblastic leukemia (AMoL) patient who later developed an unclassifiable myeloproliferative neoplasm (MPN-U). Whole-exome sequencing and cluster analysis demonstrated the presence of three distinct major clones during the clinical course: (1) an AMoL clone with ASXL1, CBL, and NPM1 somatic mutations, likely associated with the pathogenesis, and GATA2, SRSF2, and TET2 mutations, (2) an AMoL remission clone, with mutated GATA2, SRSF2, and TET2 only (possibly the founding clone (pre-leukemic HSC) that survived chemotherapy), (3) a small subclone which had JAK2 mutation during the AMoL remission, appearing at MPN-U manifestation with additional mutations. These findings suggest that pre-leukemic HSCs in AML patients may give rise to non-AML myeloid malignancies. This is the first report to analyze the clonal evolution from AMoL to MPN-U, which may provide new insight into the development of myeloid malignancies. 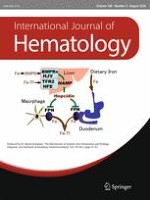 Correction to: Effects of eculizumab treatment on quality of life in patients with paroxysmal nocturnal hemoglobinuria in Japan