During the last two decades, there has been a worldwide increase in frequency and severity of infections with Clostridium difficile (CDI). Solid organ transplant (SOT) recipients receiving immunosuppressing medications are especially at risk.

We collected data from immunocompromised pediatric patients, including kidney and liver transplant recipients, at our tertiary pediatric care center in Germany. For this, we performed a retrospective review of institutional databases and analyzed data from all children who underwent diagnostic tests for CDI in a 3-year study period.

A total of 797 diagnostic tests in 343 patients were performed. We found 104 infection episodes in 69 patients (42% female, ages 12 days–20 years). Children after SOT accounted for 20% of all detected CDI patients in our series. Median time of CDI onset after transplantation was 588 days. Overall antibiotic exposure was identified as the major risk factor, particularly in immunocompromised children after SOT (exposure in > 95% of all cases).

The occurrence of CDI in the pediatric SOT population contributes to a greater length of stay and higher hospital charges. However, only very few severe complications from CDI were observed in our cohort. A potentially fulminant course of CDI can be prevented in most cases if timely diagnosis and treatment are carried out. 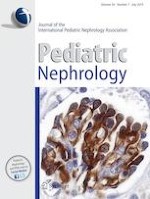 Iodine excess in children with kidney disease: are we missing hypothyroidism?

Drug-metabolizing enzymes CYP3A as a link between tacrolimus and vitamin D in renal transplant recipients: is it relevant in clinical practice?