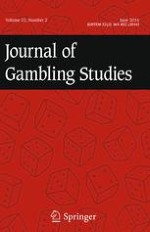 Bookmakers and a Duty of Care: Customers’ Views in England

Video Lottery is the Most Harmful Form of Gambling in Canada

Gambling Risk Amongst Adolescents: Evidence from a School-Based Survey in the Malaysian Setting

Breaks in Play: Do They Achieve Intended Aims?