Carbon dioxide (CO2) embolism is a rare but potentially devastating complication of minimally invasive abdominal and retroperitoneal surgery. Characterized by a decrease in end-tidal CO2 (ETCO2) and oxygen saturation (SpO2), CO2 emboli can cause rapid intraoperative hypotension and cardiovascular collapse. Transanal total mesorectal excision (taTME) is a novel surgical approach for rectal resection, which requires high flow CO2 insufflation in a low volume operative field. In this setting, the incidence of CO2 embolism is unknown; we evaluate three cases of intraoperative CO2 embolism that occurred during the transanal portion of the TME dissection.

All taTME cases from December 2014 to March 2018 at a single institution were reviewed. Cases of CO2 embolism were identified intraoperatively and characterized using the operative reports and anesthesia records. The transanal/pelvic insufflation included a targeted pressure of 15 mm Hg, high flow and high smoke evacuation. Physiologic derangements and management of these instances were analyzed. The postoperative course was evaluated and any complications were noted.

A total of 80 taTME were performed for benign and malignant disease. Three patients (4%) developed intraoperative evidence of CO2 embolism. Each instance occurred during the transanal portion of the dissection. Physiologic changes were marked by abrupt decrease in end-tidal ETCO2, SpO2, and blood pressure (BP). Management included immediate release of pneumopelvis, hemodynamic support with crystalloid or vasopressors, and placement of the patient in the Trendelenburg position with left side down. Within 10 min of the acute event, all patients had return of ETCO2, SpO2, and BP to pre-event levels. There were no intraoperative or postoperative sequelae including arrhythmia, myocardial infarction, stroke or death. No cases required conversion to open.

During taTME, rare CO2 emboli may occur in the setting of venous bleeding during pneumopelvis, causing sudden, transient cardiovascular instability. Immediate recognition of rapid decrease in ETCO2, SpO2, and BP should be followed by desufflation of pneumopelvis, patient positioning in Trendelenburg and left lateral decubitus, and hemodynamic support. Increased awareness of this potential complication and maintaining a high index of suspicion will lead to preparedness of the anesthesia and surgery teams. 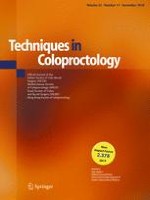 TAMIS repair of a rectal stenosis not treatable by endoscopy