The development of addictive behavior is associated with functional and structural plasticity in the mesocorticolimbic pathway. Increased connectivity upon cocaine administration has been inferred from increases in dendritic spine density, but without observations of presynaptic elements. Recently, we established a method that enables analyses of both dendritic spines and glutamatergic boutons and presented evidence that cocaine induces changes in striatal connectivity. As the pharmacological and behavioral effects of cocaine directly implicate dopaminergic neurons and their afferents, a remaining question is whether dopaminergic striatal innervations also undergo structural plasticity. To address this issue, we generated transgenic mice in which the fluorophore tdTomato is expressed under the promoter of the dopamine transporter gene. In these mice, specific labeling of dopaminergic boutons was observed in the striatum. Of note, the accordance of our results for control mice with previous electron microscopy studies confirms that our method can be used to decipher the spatial organization of boutons in relation to dendritic elements. Following repeated cocaine administration that led to behavioral locomotor sensitization, an increased density of dopaminergic boutons was observed 1 day later in the nucleus accumbens shell specifically, and not in other striatal regions. Combined labeling of dopaminergic boutons and striatal dendrites showed that cocaine significantly increased the percentage of dendritic spines associated with a dopaminergic bouton. Our results show that chronic cocaine administration induces structural plasticity of dopaminergic boutons that could participate in dopamine-dependent neuronal adaptations in the striatum. 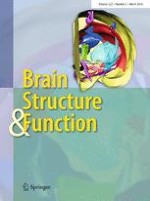 The role of phasic norepinephrine modulations during task switching: evidence for specific effects in parietal areas

Analysis of the vasculature by immunohistochemistry in paraffin-embedded brains