Individuals with disorders that include psychotic symptoms (i.e. psychotic disorders) experience broad cognitive impairments in the chronic state, indicating a dimension of abnormality associated with the experience of psychosis. These impairments negatively impact functional outcome, contributing to the disabling nature of schizophrenia, bipolar disorder, and psychotic depression. The robust and reliable nature of cognitive deficits has led researchers to explore the timing and profile of impairments, as this may elucidate different neurodevelopmental patterns in individuals who experience psychosis. Here, we review the literature on cognitive deficits across the life span of individuals with psychotic disorder and psychotic-like experiences, highlighting the dimensional nature of both psychosis and cognitive ability. We identify premorbid generalized cognitive impairment in schizophrenia that worsens throughout development, and stabilizes by the first-episode of psychosis, suggesting a neurodevelopmental course. Research in affective psychosis is less clear, with mixed evidence regarding premorbid deficits, but a fairly reliable generalized deficit at first-episode, which appears to worsen into the chronic state. In general, cognitive impairments are most severe in schizophrenia, intermediate in bipolar disorder, and the least severe in psychotic depression. In all groups, cognitive deficits are associated with poorer functional outcome. Finally, while the generalized deficit is the clearest and most reliable signal, data suggests specific deficits in verbal memory across all groups, specific processing speed impairments in schizophrenia and executive functioning impairments in bipolar disorder. Cognitive deficits are a core feature of psychotic disorders that provide a window into understanding developmental course and risk for psychosis. 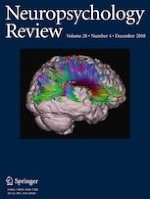 The Neural Substrate of Reward Anticipation in Health: A Meta-Analysis of fMRI Findings in the Monetary Incentive Delay Task

The Trajectory of Pseudoneglect in Adults: A Systematic Review

Correction to: The Neural Substrate of Reward Anticipation in Health: A Meta-Analysis of fMRI Findings in the Monetary Incentive Delay Task

Prevalence of Depression, Anxiety and PTSD in People with Dementia: a Systematic Review and Meta-Analysis