Single-centre cohort study. All patients with stage IIA CC discussed in a multidisciplinary colorectal cancer clinic from January 2010 to December 2012 were evaluated. Clinical data, laboratory data and tumour features, including expression of DNA repair proteins (EDRP), were analysed. Assessment of overall and disease free survival, recurrence, recurrence site and recurrence’s method of diagnosis was performed. The associations between variables were tested through the Fisher’s exact test (SPSS 23).

Fifty-five patients were included (55% male gender; mean age at diagnosis was 70.3 years (42–88)). CC was in the left colon in 62%, high grade in 7% and had lymphovascular invasion in 7% of the cases. Only one patient was submitted to emergent surgery for obstructive symptoms. In 55% of cases ≥ 12 lymph nodes were collected. There was EDRP loss in nine patients (MLH1/PMS2: six; MSH2/MSH6: three)—only two fulfilled revised Bethesda criteria. Recurrence occurred in five patients (8.9%), and it was diagnosed through surveillance in all of them. No variable showed a statistically significant association with recurrence; however, there were no recurrences in patients with EPRD loss (p = 0.209). Mean follow-up time was 43 months (2–70). In those with recurrence, mean disease-free survival was 23.4 months.

The overall good prognosis and absence of recurrence predictive factors were confirmed, validating the decision of not to submit stage IIA CC patients to chemotherapy risks. 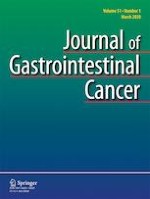