Colonic stenting has evolved to be an alternative to emergency laparotomy in the management of acute left-sided malignant colonic obstruction. This retrospective comparative study aimed to review the outcomes of colonic stent as bridge to surgery with emergency operation in a regional hospital in Hong Kong.

Consecutive patients who were admitted from January 2006 to July 2014 with diagnosis of malignant left-sided colonic obstruction (from splenic flexure to rectosigmoid colon) were included. Patients with peritonitis or disseminated disease were excluded. Colonic stenting was attempted in all eligible patients when fluoroscopy was available in the endoscopy suite during office hour. Otherwise, emergency operation was performed. For patients with clinical success in colonic stenting, interval colectomies were performed. The postoperative outcomes, including the 30-days mortality, the stoma creation rate, the complication rate as well as the survival data were analyzed on an intention-to-treat (ITT) basis.

Colonic self-expanding metal stent is effective in the management of acute left-sided colonic obstruction. It is associated with reduced stoma creation rate and postoperative morbidity. The oncological safety is not jeopardized by stenting and the interval operation. 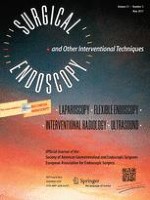 Safety and efficacy of POEM for treatment of achalasia: a systematic review of the literature