In a previous study of young adult college students (age 18–25), we found an association among 157 past year gamblers between gambling severity as measured by the Problem Gambling Severity Index and negative affect as measured by the total score on the 21-item Depression Anxiety and Depression Scales. An inverse association between the behavioral activation system reward responsiveness scale and gambling severity was found, as was an inverse association between reward and negative affect. In addition, an association between the behavioral inhibition system scale and negative affect was observed. Theoretical models such as Shaffer’s Syndrome Addiction model posit that problem behaviors are expressions of a common underlying etiology. In the current paper, we present results from the previous database regarding the severity of alcohol use among 286 past year drinkers as measured by the Alcohol Use Disorders Identification Test. As with gambling severity, reward responsiveness was inversely associated with alcohol use severity both directly and indirectly through negative affect. Severity was also directly associated with the BAS fun seeking scale. As previously found, negative affect was associated with inhibition. Among 125 students engaging in each behavior, scores for each severity index were also correlated. These findings suggest that a reward oriented coping approach may be protective against both more severe gambling and alcohol use problems. An inhibitory or escapist approach may lead to more severe problems. They also suggest that behaviors are co-occurring in a significant number of students, and levels of severity in one behavior are associated with levels in the other. It is hoped these results can inform future research and interventions.

Titel
Commonalities in the Association of Behavioral Activation and Behavioral Inhibition with Problem Gambling and Alcohol Use in Young Adult College Students
Autor:
John Atkinson 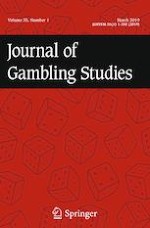 The Stimulating Nature of Gambling Behaviors: Relationships Between Stimulant Use and Gambling Among Adolescents

Gambling Risk Groups are Not All the Same: Risk Factors Amongst Sports Bettors