Dopamine plays important roles in motivational and social behaviors in mammals, and it has been implicated in several human neurological and psychiatric disorders. Rodents are used extensively as experimental models to study dopamine function in health and disease. However, interspecies differences of dopamine systems remain incompletely characterized. Here, we assessed whether the commonly referenced anatomical organization of dopamine systems in Mus musculus differs from another rodent species, Peromyscus californicus, which exhibits unique social behaviors such as biparental care. We applied tyrosine hydroxylase immunofluorescence labeling and high-throughput microscopy to establish whole-brain maps of dopamine systems in P. californicus. By comparing these maps to those from M. musculus, we identified unexpected anatomical similarity and difference between these two species. A sex difference in dopamine neurons at the anteroventral periventricular nucleus of hypothalamus, which has been implicated in regulating the maternal behaviors of the uniparental M. musculus, is similarly present in the biparental P. californicus. In contrast, major interspecies differences from M. musculus are found in the ventral midbrain and striatum of P. californicus, including the expansion of midbrain dopamine neurons into the ventral substantia nigra and the presence of an internal capsule-like white matter tract that demarcates a dorsomedial area from the rest of the striatum. These features identified in P. californicus resemble the anatomical organization of the primate brain more closely compared to those in M. musculus. Our findings suggest that P. californicus is a unique model organism for studying the evolution of dopamine systems in mammals and the disorders of dopamine systems.
Anzeige 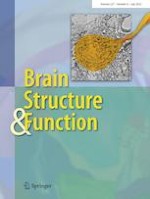 Correction to: Tracing in vivo the dorsal loop of the optic radiation: convergent perspectives from tractography and electrophysiology compared to a neuroanatomical ground truth

Application of the mirror technique for block-face scanning electron microscopy

Modelling the laminar connectome of the human brain

Individual variability in the nonlinear development of the corpus callosum during infancy and toddlerhood: a longitudinal MRI analysis