The online version of this article (https://​doi.​org/​10.​1007/​s10620-017-4874-6) contains supplementary material, which is available to authorized users.
Drs. Amine Benmassaoud and Talal Al-Taweel are considered co-first authors.

We compared the short-term and long-term efficacy and safety of IFX and ADA in CD.

We performed a single-center retrospective study including biologic-naïve adult patients with CD who were started on IFX or ADA at the McGill University Health Center. The primary end points were clinical response and remission at 12 months. Secondary end points included corticosteroid-free remission at 12 months, durable remission, and treatment failure with need for steroids, hospitalization or surgery. Safety was also assessed.

Two hundred and twenty patients were included (143 IFX, 77 ADA). Patients on IFX had a higher prevalence of fistulizing or perianal disease and corticosteroid treatment at baseline. Rates of clinical remission and corticosteroid-free remission at 12 months were similar between both groups: 63.8 versus 76.3% (p = 0.139) and 54.1 versus 44.7% (p = 0.354), respectively, for IFX and ADA. Combination therapy led to significantly higher remission rates at 12 months compared to monotherapy for patients on IFX (81.2 vs. 52.1%, p = 0.008), but not for those on ADA. Higher rates of adverse events were reported with IFX compared to ADA (p = 0.006).

Our real-life experience in biologic-naïve CD patients demonstrated that patients started on IFX were more likely to have a harder-to-treat phenotype. Despite that, efficacy end points were similar between both groups. Clinical remission was higher in patients with combination therapy for IFX, but not for those on ADA. This warrants further investigation. 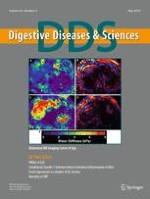 Mortality from Spontaneous Bacterial Peritonitis Among Hospitalized Patients in the USA

Water Exchange Versus Split-Dose Bowel Preparation and the ADR: Is WE There Yet?