The online version of this article (https://​doi.​org/​10.​1007/​s00345-018-2583-1) contains supplementary material, which is available to authorized users.
Xinyang Liao, Shi Qiu and Yige Bao contributed equally as first authors of this manuscript.

PDE5I administrations were generally efficient and well-tolerated in diabetic men. Among these administrations, vardenafil PRN and mirodenafil PRN seem to have a possible advantage of efficacy and avoiding adverse effects compared to others. There is no significant difference between regular and on-demand regimens of PDE5Is. 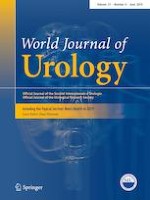 The use of hydrogel spacer in men undergoing high-dose prostate cancer radiotherapy: results of a prospective phase 2 clinical trial

Peyronie’s disease and testosterone deficiency: Is there a link?

The effect of diet on BPH, LUTS and ED