The purpose of this study was to investigate, in vitro, the retaining of 2 % CHX gel, 2 % CHX liquid and QMix (an endodontic irrigant) within a root canal for 24 h, 30, 90, and 120 days by chemical analysis.

Eighty extracted human teeth were used for this study. The samples were divided into four groups (G1-G4), according to the chemical auxiliary substance used to perform the instrumentation: G1 (control): distilled water, G2: 2 % CHX gel, G3: 2 % CHX liquid, and G4: QMix. The roots were prepared up to the instrument #45 by serial instrumentation. Longitudinal grooves were carved on the free surfaces of the roots, providing 2 halves of each root and resulting in 40 samples per group. Each group was randomly divided into four subgroups (n = 10), and substantivity was evaluated after 24 h, 30, 90, and 120 days. The amount of 2 % CHX gel, 2 % CHX liquid, and QMix (in micrograms) was measured through reverse-phase high-performance liquid chromatography. Statistical analysis was performed by ANOVA and Games-Howell test for post-hoc comparisons (α = 0.05).

CHX gel, CHX liquid, and QMix were retained in dentin up to 120 days. Significantly less substantivity was observed for QMix, irrespective of the period of time. Statistically significant higher values were observed for CHX gel after 24 h, while no differences were noted between CHX gel and CHX liquid after 30, 90, and 120 days of evaluation (p < 0.05).

Two percent CHX (gel and liquid) and QMix are retained in root canal dentin for up to 120 days.

This study proposes an alternative of auxiliary chemical substance to be used during the chemo-mechanical preparation. 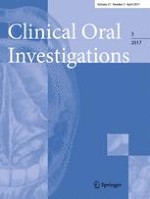 Is there enough evidence to use botulinum toxin injections for bruxism management? A systematic literature review

Responsiveness of the Prosthetic Esthetic Scale

Effect of nasal high-flow oxygen therapy on the swallowing reflex: an in vivo volunteer study