This prospective randomized study analyzed 80 cervical cancer patients who were treated at our center during March 2017 and July 2018. Patients were divided into two arms: one received NACT and definitive CT/T and the other received definitive CT/RT. Statistical analysis was done using SPSS V.20 software.

Overall response rate in our study was found to be 96.2%. In the study group, it was 97.5%, whereas in the control group, it was 95%. Majority of patients were in the age group 41–50 years, mainly stage IIb and IIIb. Tumor response in both the arms was similar and statistically significant (Chi2 = 0.348; p > 0.05). The hematologic toxicities ( p > 0.05) were more in the NACT group than in the CCRT group, while gastrointestinal toxicities were slightly higher in the control (statistically insignificant).

NACT with taxane/platin followed by definitive CT/RT is as effective as the standard care in the treatment of locally advanced cervical cancer. It has even shown better results (p value > .005) and is also helpful in reducing systemic micrometastasis and bulk of the disease. It can be used as an alternative to the standard care at the places of long waiting time for the definitive treatment, without compromising the outcome. 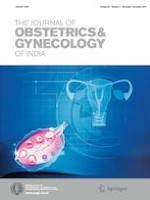 Can RBC Indices be Used as Screening Test for Beta-Thalassemia in Indian Antenatal Women?

Coagulopathies in Pregnancy: What an Obstetrician Oughd to Know!