Laparoscopic liver resection has thus far not gained widespread acceptance among liver surgeons. Valid questions remain regarding the relative clinical superiority of the laparoscopic approach as well as whether laparoscopic hepatectomy carries any economic benefit compared with open liver surgery.

The aim of this work is to compare the clinical and economic impact of laparoscopic versus open left lateral sectionectomy (LLS).

Between May 2002 and July 2008, 44 laparoscopic LLS and 29 open LLS were included in the analysis. Deviation-based cost modeling (DBCM) was utilized to compare the combined clinical and economic impact of the open and laparoscopic approaches.

Our study seems not only to corroborate the safety and clinical benefit of the laparoscopic approach but also suggests a fiscally important cost advantage for the minimally invasive approach. 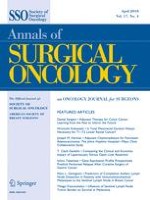 Tumor Marker Evolution: Comparison with Imaging for Assessment of Response to Chemotherapy in Patients with Colorectal Liver Metastases

Challenges in the Study of Adjuvant Chemoradiation After Pancreaticoduodenectomy