The online version of this article (https://​doi.​org/​10.​1007/​s00417-018-3992-y) contains supplementary material, which is available to authorized users.
The authors have no proprietary interest in any aspect of this study.

Patients with DR underwent UWFFA using the Optos® panoramic 200Tx imaging system and wide-angle OCTA with 12 × 12 mm fields of five visual fixations using the PLEX Elite 9000®. We compared the abilities of UWFFA and OCTA to detect NPAs and NV.

The wide-angle OCTA seems to be clinically useful for the detection of NPAs or NV. 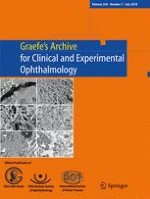 Reply to the letter to the editor: Aflibercept in diabetic macular edema refractory to previous bevacizumab: outcomes and predictors of success