The present systematic review and meta-analysis aimed to assess and compare the safety and efficacy of radiofrequency (RF) and cryoballoon (CB) ablation for paroxysmal atrial fibrillation (PAF). RF and CB ablation are two frequently used methods for pulmonary vein isolation in PAF, but which is a better choice for PAF remains uncertain.

A systematic review was conducted in Medline, PubMed, Embase, and Cochrane Library. All trials comparing RF and CB ablation were screened and included if the inclusion criteria were met.

A total of 38 eligible studies, 9 prospective randomized or randomized controlled trials (RCTs), and 29 non- RCTs were identified, adding up to 15,496 patients. Pool analyses indicated that CB ablation was more beneficial in terms of procedural time [standard mean difference = −0.58; 95% confidence interval (CI), −0.85 to −0.30], complications without phrenic nerve injury (PNI) [odds ratio (OR) = 0.79; 95% CI, 0.67–0.93; I 2 = 16%], and recrudescence (OR = 0.83; 95% CI, 0.70–0.97; I 2 = 63%) for PAF; however, the total complications of CB was higher than RF. The subgroup analysis found that, compared with non-contact force radiofrequency (non-CF-RF), both first-generation cryoballoon (CB1) and second-generation cryoballoon (CB2) ablation could reduce complications with PNI, procedural time, and recrudescence. However, the safety and efficacy of CB2 was similar to those of CF-RF.

Available overall and subgroup data suggested that both CB1 and CB2 were more beneficial than RF ablation, and the main advantages were reflected in comparing them with non-CF-RF. However, CF-RF and CB2 showed similar clinical benefits. 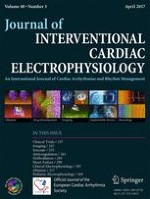