To date, most of the studies on safety and efficacy of supraglottic airway devices were done in Caucasian patients, and the results may not be extrapolated to Asian patients due to the different airway anatomy. We conducted this study to compare Supreme™ LMA (SLMA) and Proseal™ LMA (PLMA) size 1.5 in anaesthetized children among an Asian population. This prospective randomized clinical trial was conducted in a tertiary teaching hospital from September 2013 until May 2016. Sixty children, weighing 5–10 kg, who were scheduled for elective surgery under general anaesthesia were recruited and completed the study. Patients were randomly assigned to have either SLMA or PLMA as the airway device for general anaesthesia, and standard anaesthesia protocol was followed. The primary outcome measured was the oropharyngeal leak pressure (OLP). The rate of successful insertion, insertion time, fibreoptic view of larynx and airway complications for each device were also assessed. There were no statistically significant differences between SLMA and PLMA size 1.5 in oropharyngeal leak pressure [19.1 (± 5.5) cmH2O vs. 19.8 (± 4.5) cmH2O, p = 0.68]. Secondary outcomes including time to insertion [20.8 (± 8.3) vs. 22.1 (± 8.3) s, p = 0.57], first attempt success rate for device insertion, fibreoptic view of larynx, and airway complications were also comparable between the two devices. We found that all the patients who had a failed device insertion (either PLMA or SLMA) were of a smaller size (5–6.2 kg). The oropharyngeal leak pressure of the SLMA 1.5 was comparable with the PLMA 1.5, and both devices were able to maintain an airway effectively without significant clinical complications in anaesthetized children from an Asian population. 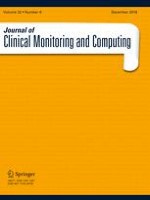 Quantitative measures of EEG for prediction of outcome in cardiac arrest subjects treated with hypothermia: a literature review