We performed a multi-institutional retrospective analysis of 213 women who underwent POP surgical repairs between December 2012 and December 2017. Treatment-related complications were classified using the ClavienDindo grading system and compared among the three groups. Perioperative data, anatomical success rates, patient satisfaction, and postoperative complication data were collected during the follow-up period, which lasted up to 12 months.

Of 213 patients, 70 (33%) underwent SCP, 85 (40%) underwent NTR, and 58 (28%) underwent VMR. By postoperative day 30, the all-inclusive complication rate was lower in the SCP group than in the NTR or VMR group; however, there was no between-group difference in complication grade. The VMR group underwent fewer concomitant hysterectomies than the other groups, and operative time was the longest for SCP. Overall, recovery time, anatomical success rate, and patient satisfaction were comparable for all three repairs.

All three surgical techniques were equivalent in patient satisfaction, anatomical success rate, and complication rate. SCP should be recommended to elderly women who meet criteria for prolonged general anesthesia, as it was associated with fewer perioperative complications than NTR and VMR. 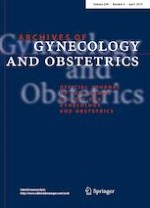 Association of twins' sex discordance and age at menarche