The study population was elderly (median 63 years, interquartile range 18), 58% were male, with the majority having intraabdominal cancer surgery. Although the DASI scores were statistically related to the measured pVO2 (N = 43, adjusted R2 = 0.20, p = 0.002), both the bias (8 ml kg− 1 min− 1) and 95% limits of agreement (19.5 to − 3.4 ml kg− 1 min− 1) between the predicted and measured pVO2 were large. Using some of the individual components, recalibrating the intercept and regression coefficient of the total DASI score did not substantially improve its ability to predict the measured pVO2.

In summary, both the limits of agreement and bias between the measured and DASI-predicted pVO2 were substantial. The DASI-predicted pVO2 based on patient’s assessment of their functional status could not be considered a reliable surrogate of measured pVO2 during CPET for the population of patients pending major cancer surgery and cannot, therefore, be used as a triage tool for referral to CPET centres for objective risk assessment. 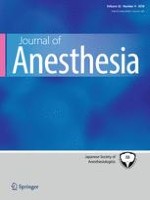 ED50 of remifentanil for providing excellent intubating conditions when co-administered with a single standard dose of propofol without the use of muscle relaxants in children: dose-finding clinical trial

The history and progress of local anesthesia: multiple approaches to elongate the action

Introduction of a modified double-lumen tube