Laser balloon (LB) and cryoballoon (CB) ablation are two balloon-based catheter ablation technologies used for atrial fibrillation (AF) ablation in recent years. However, the efficacy and the safety of LB ablation in comparison to CB ablation remained indeterminate. We sought to compare these two technologies by conducting meta-analysis of previous studies using both the CB and LB ablation systems for AF ablation.

We searched electronic scientific databases for studies of LB vs. CB ablation in AF patients. The procedural efficacy was assessed by the success of acute pulmonary vein isolation (PVI) and the 12-month recurrence of any atrial arrhythmia, and the safety was evaluated by the risk of procedure-related complications.

LB ablation has a trend toward higher procedural efficacy compared with CB ablation in paroxysmal AF patients. However, longer procedure duration and a statistically non-significant trend of more procedure-related complications were also observed in patients ablated by LB. Further larger comparative randomized trials are warranted to disclose the impact of LB compared with CB for ablation of AF. 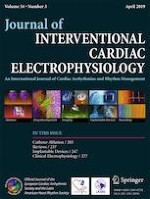