Patients aged ≥ 75 years with pancreatic adenocarcinoma undergoing LPD or OPD were identified from the NCDB (2010–2013). Baseline characteristics and perioperative outcomes were compared using a χ 2 and Student’s t test. The Kaplan–Meier method was used to generate survival curves, and differences were tested using a log-rank test. A multivariate cox proportional hazard model was applied to estimate the hazard ratio (HR) of LPD on overall survival (OS).

The vast majority of the NCDB participating facilities perform less than 5 LPD cases per year, which was associated with an increased risk of perioperative mortality. Overall 90-day mortality was significantly lower in the LPD group and there was a trend towards improved OS in the LPD group compared to the OPD group after adjusting for patient and tumor-related characteristics. Studies with increased sample size and longer follow-up are needed before definitive conclusions can be made. 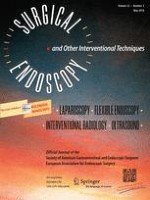 Strategy of laparoscopic surgery for colon cancer of the splenic flexure: a novel approach