Because of its advantage as a minimally invasive procedure, nasal brushings have been increasingly used and proposed as a valuable approach to study lower airway diseases in lieu of bronchial epithelial cells. However, there is limited or conflicting evidence pertaining to whether nasal samples can be surrogates to bronchial samples. The goal of the present study is to test whether nasal epithelial cells have similar antiviral and inflammatory responses to IL-13 treatment and rhinovirus infection, a condition mimicking virally induced asthma exacerbation. Nasal and bronchial airway epithelial cells taken from the same patient were cultured under submerged and air–liquid interface (ALI) culture in the absence or presence of rhinovirus and IL-13 treatment. Inflammatory cytokines IP-10 and eotaxin-3, antiviral gene Mx1 and viral levels were measured. 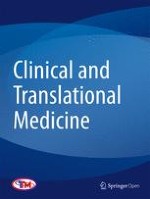 Lipidomics unveils the complexity of the lipidome in metabolic diseases

Recent advances in hyaluronic acid based therapy for osteoarthritis