To compare the characteristics of the photopic negative response (PhNR) between the focal macular and full-field electroretinograms (ERGs) in monkeys.

Both focal macular and full-field photopic ERGs were recorded in four cynomolgus monkeys under identical stimulus and recording conditions except for which area of the retina was illuminated. The luminance and duration of red flash stimuli were varied in the presence of steady blue background illumination. These ERGs were recorded before and after intravitreal injection of tetrodotoxin (TTX). 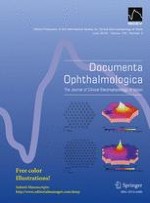 Erratum to: Witnessing the first sign of retinitis pigmentosa onset in the allegedly normal eye of a case of unilateral RP: a 30-year follow-up

The diagnosis and assessment of visual function in Singaporean children with electrophysiology: 10-year results