In China, hyperlipidemia is the second major reason of acute pancreatitis.

Predictive accuracy of scoring systems was measured by the area under the receiver operating characteristic curve (AUC) in a retrospective study. Pairwise AUC comparisons were performed to calculate the difference between scoring systems. 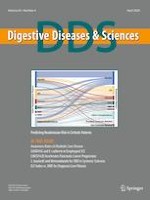 A Matter of TACEte: Plain Vanilla or Combination?

Dysphagia Lusoria: Is the Dysmotility Connection Illusory or Real?

Sedation During Endoscopy in Patients with Cirrhosis: Safety and Predictors of Adverse Events