In this study, we aim to evaluate the accuracy of STONE (stone size, tract length, obstruction, number of involved calyces, and essence/stone density), Clinical Research Office of the Endourological Society (CROES), and Guy’s nephrolithometry scoring systems (NSS) in obese patients. The charts of patients who underwent percutaneous nephrolithotomy (PNL) between June 2008 and June 2016 were retrospectively analyzed. Calculations of the STONE, CROES, and Guy’s NSS were performed by a resident who was well informed regarding each NSS. Patients were classified under nine scores according to STONE, four grades according to CROES, and four grades according to Guy’s NSS. In total, 248 obese patients were enrolled in the study. Stone size was significantly higher in patients without stone-free status (p = 0.001). In patients who were stone-free and those with residual stones, the mean STONE score was 9.71 and 9.23 (p = 0.160), CROES was 172 and 129 (p = 0.001), and Guy’s NSS was 1.67 and 2.75 (p = 0.001). Multivariate regression analysis identified the CROES and Guy’s NSS were independent factors for PNL success in obese patients (p = 0.01 and p = 0.01, respectively). The CROES and Guy’s NSS showed good accuracy with PNL success (AUC = 0.777 and AUC = 0.844, respectively). None of the three NSS systems were statically associated with a complication rate (p = 0.23 for STONE, p = 0.14 for CROES, and p = 0.51 for Guy’s NSS). Our study demonstrated that CROES and Guy’s NSS were independent predictors of stone-free rate following PNL in obese patients. Our study also revealed that three of the NSSs were not useful for predicting PNL complications in obese patients. 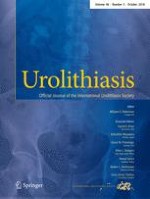 Recurrence rates of urinary calculi according to stone composition and morphology

Functional and morphological recovery of solitary kidneys after drainage. Double J stent placement vs emergency ureteroscopy: which one is reasonable?

Composition of urinary calculi in infants: a report from an endemic country