To evaluate and compare the intrachoroidal structures of eyes with typical neovascular age-related macular degeneration (AMD) with those of eyes with polypoidal choroidal vasculopathy (PCV).

Eighty-four treatment-naïve eyes of 84 patients (22 women and 62 men) with typical neovascular AMD or PCV located in the subfoveal region were studied. Cross-sectional images of the retina and choroid were obtained by swept-source optical coherence tomography (SS-OCT). The horizontal SS-OCT images were analyzed by a manual delineation technique and by a binarization method.

The intrachoroidal structures of typical neovascular AMD and PCV eyes differ significantly. In eyes with PCV, there seemed to be a greater dilation of the large choroidal vessels. 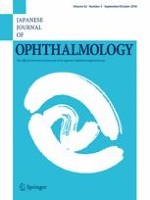