The aim of this study was to compare the effect of two sugar-substituted chewing gums besides toothbrushing on different clinical, microbiological, and biochemical caries- and gingivitis-related variables.

The study was designed as a double-blind, randomized, controlled trial with three parallel arms. A total of 130 dental students, who volunteered after signing an informed consent, were randomly allocated to receive one of the following interventions: hexitol-sweetened gum containing casein phosphopeptide–amorphous calcium phosphate (CPP-ACP), pentitol-sweetened gum containing no CPP-ACP, and control group with no gum. Subjects within the experimental groups chewed two gum pellets for 20 min three times a day after meals. The daily consumption level of both polyols was 6.0 g. Clinical examinations and salivary samplings were conducted at baseline and after 30 days of gum use. Pre- and post-intervention stimulated whole saliva samples were quantified for calcium/phosphate ionic concentration, total facultative bacterial load, Streptococcus mutans/Lactobacillus spp. counts, and Gram-negative percentage.

Although these findings might indicate that a 30-day protocol of daily chewing of pentitol-sweetened gum containing no CPP-ACP might have some a reducing effect on the salivary levels of facultative bacteria, S. mutans and Lactobacillus spp., there was only a marginal, if any, benefit from the chewing gums under study on some microbiological caries- and gingivitis-related variables.

Taking into account that for transferring results into clinically relevant conclusions the findings need to be strong and consistent, adhering to single significant differences appears not appropriate. Hence, the clinical significance of chewing gums as an adjunctive tool for daily oral care remained questionable. 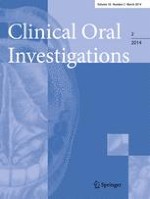