We introduced ‘compensatory-reserve-weighted intracranial pressure (ICP),’ named ‘weightedICP’ for brevity, as a variable that may better describe changes leading to mortality after traumatic brain injury (TBI) over the standard mean ICP.

ICP was monitored prospectively in over 1023 sedated and ventilated patients. The RAP coefficient (R—correlation, A—amplitude, and P—pressure) was calculated as the running correlation coefficient between slow changes in the pulse amplitude of ICP and the mean ICP. RAP has a value of 0 on the linear part of the pressure–volume curve and a value of + 1 on the ascending exponential part. Then, RAP decreases towards zero or even becomes negative when ICP increases further—a phenomenon thought to be related to the critical closing of cerebral vessels. In this study, we investigated a derived variable called weightedICP, calculated as ICP*(1 − RAP).

Mortality after TBI was associated with both elevated ICP and weightedICP. Analysis of variance showed higher values of test statistics for weightedICP (K = 93) than for ICP (K = 64) in outcome categorization. Additionally, receiver operator curve analysis indicated greater area under the curve for weightedICP (0.71) than for ICP (0.67) with respect to associated mortality; however, the difference was not statistically significant (p = 0.12). The best threshold (maximizing sensitivity and specificity) was 19.5 mm Hg for mean ICP, and 8 mm Hg for weightedICP. Mortality rate expressed as a function of mean ICP and weightedICP showed an ascending profile in both cases.

The proposed variable shows a significant association with mortality following head injury. It is sensitive to both the rising absolute ICP and to the critical deterioration of pressure–volume compensation. 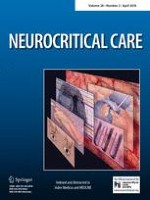 Reply to “Comments on the Cerebral Edema After CPR: A Therapeutic Target Following Cardiac Arrest?”