A rhabdovirus infecting maize and wheat crops in Argentina was molecularly characterized. Through next-generation sequencing (NGS) of symptomatic leaf samples, the complete genome was obtained of two isolates of maize yellow striate virus (MYSV), a putative new rhabdovirus, differing by only 0.4% at the nucleotide level. The MYSV genome consists of 12,654 nucleotides for maize and wheat virus isolates, and shares 71% nucleotide sequence identity with the complete genome of barley yellow striate mosaic virus (BYSMV, NC028244). Ten open reading frames (ORFs) were predicted in the MYSV genome from the antigenomic strand and were compared with their BYSMV counterparts. The highest amino acid sequence identity of the MYSV and BYSMV proteins was 80% between the L proteins, and the lowest was 37% between the proteins 4. Phylogenetic analysis suggested that the MYSV isolates are new members of the genus Cytorhabdovirus, family Rhabdoviridae. Yellow striate, affecting maize and wheat crops in Argentina, is an emergent disease that presents a potential economic risk for these widely distributed crops. 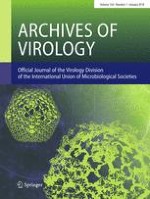 Identification of a novel vitivirus from grapevines in New Zealand

The role of polymorphonuclear neutrophils during HIV-1 infection