Artery-first approach pancreatoduodenectomy (AFA-PD) is an important technique for treating pancreatic ductal adenocarcinoma (PDAC). However, it remains unknown whether performing complete lymphadenectomy around the entire superior mesenteric artery (SMA) is associated with better outcomes. In this retrospective study, we aimed to investigate whether this approach improved overall and recurrence-free survival in patients with PDAC.

We identified 88 patients with T3 PDAC who underwent PD at St. Marianna University School of Medicine, Kawasaki, Japan, between April 2005 and October 2017. Two groups were defined: an “AFA-PD group” (n = 45) who had undergone AFA-PD in addition to complete lymphadenectomy around the entire SMA, and a “conventional PD group” (n = 43) in whom complete lymphadenectomy had not been performed (conventional group). Univariate and multivariate survival analyses were performed to identify risk factors for overall and disease-free survival.

AFA-PD with complete lymphadenectomy around the entire SMA can prevent recurrences around the SMA and may prolong overall survival in patients with PDAC. 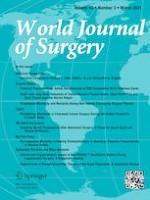 Re-evaluating ‘Surgical Dogma’ in the Postoperative Management of Pheochromocytoma/Paragangliomas: Reflecting on the Data Cannot Help but to Bring About Change