Most immunotherapy studies in animal tumor models are performed in early stages of the disease. Reports on the studies of treatment in late stages of tumor growth and metastasis are much rarer. To guide future efforts for treatment in late-stage disease, a model of effective immune rejection of advanced metastasized cancer is reviewed and lessons therefrom are summarized. Already cachectic DBA/2 mice with a subcutaneously transplanted syngeneic tumor (ESb-MP lymphoma) of 1.5 cm diameter and with macroscopic liver and kidney metastases at 4 weeks could be successfully treated by a combination of sublethal (5 Gy) irradiation followed by a single transfer of 20 million anti-tumor immune spleen cells from tumor-resistant allogeneic MHC-B10.D2 mice. Following intravenous cell transfer, the primary tumors became encapsulated and were eventually rejected from the skin while visceral metastases gradually disappeared leaving behind only scar tissue. There was wound-healing at the site of the rejected primary tumor, and the animals survived long term without any tumor recurrence. The complete eradication of late-stage disease by adoptive cellular immunotherapy could be corroborated noninvasively by 31P-NMR spectroscopy of primary tumors and by 1H-NMR microimaging of liver metastases. Conclusions from functional mechanistic studies in this model are summarized and clinical implications discussed. 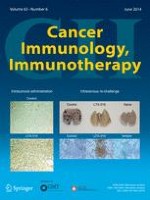