Healthy microcirculation is important to maintain the health of tissues and organs, most notably the heart, kidney and retina. Single components of the diet such as salt, lipids and polyphenols may influence microcirculation, but the effects of dietary patterns that are consistent with current dietary guidelines are uncertain. It was hypothesized that compliance to UK dietary guidelines would have a favourable effect on skin capillary density/recruitment compared with a traditional British diet (control diet).

Microvascular measures were available for 137 subjects out of the 165 participants randomized to treatment. There was evidence of compliance to the dietary intervention, and participants randomized to follow dietary guidelines showed significant falls in resting supine systolic, diastolic and mean arterial pressure of 3.5, 2.6 and 2.9 mmHg compared to the control diet. There was no evidence of differences in capillary density, but capillary recruitment was 3.5 % (95 % CI 0.2, 6.9) greater (P = 0.04) on dietary guidelines compared with control.

Adherence to dietary guidelines may help maintain a healthy microcirculation in middle-aged men and women. This study is registered at www.​isrctn.​com as ISRCTN92382106. 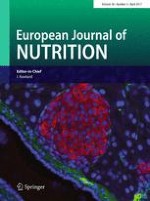 The effect of hypohydration on endothelial function in young healthy adults