In recent years, several articles have reported considerable results with the Mini/One Anastomosis Gastric Bypass (MGB/OAGB) in terms of both weight loss and resolution of comorbidities. Despite those positive reports, some controversies still limit the widespread acceptance of this procedure. Therefore, a multicenter retrospective study, with the aim to investigate complications following this procedure, has been designed.

To report the complications rate following the MGB/OAGB and their management, and to assess the role of this approach in determining eventual complications related especially to the loop reconstruction, in the early and late postoperative periods, the clinical records of 2678 patients who underwent MGB/OAGB between 2006 and 2015 have been studied.

Intraoperative and early complications rates were 0.5 and 3.1%, respectively. Follow-up at 5 years was 62.6%. Late complications rate was 10.1%. A statistical correlation was found for perioperative bleeding both with operative time (p < 0.001) or a learning curve of less than 50 cases (p < 0.001). A statistical correlation was found for postoperative duodenal-gastro-esophageal reflux (DGER) with a preexisting gastro-esophageal-reflux disease (GERD) or with a gastric pouch shorter than 9 cm, (p < 0.001 and p = 0.001), respectively. An excessive weight loss correlated with a biliopancreatic limb longer than 250 cm (p < 0.001).

Our results confirm MGB/OAGB to be a reliable bariatric procedure. According to other large and long-term published series, MGB/OAGB seems to compare very favorably, in terms of complication rate, with two mainstream procedures as standard Roux-en-Y gastric bypass (RYGBP) and laparoscopic sleeve gastrectomy (LSG). 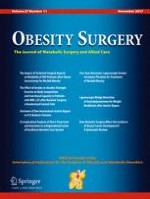