Time of death estimation in humans for the benefit of forensic medicine has been successfully approached by Henssge, who modelled body cooling based on measurements of Marshall and Hoare. Thereby, body and ambient temperatures are measured at the death scene to estimate a time of death based on a number of assumptions, such as initial body temperature and stable ambient temperature. While so far, practical use of the method resorted to paper print outs or copies of a nomogram using a ruler, increasingly, users are interested in computer or mobile device applications. We developed a computational solution that has been available online as a web accessible PHP program since 2005. From that, we have received numerous requests not so much to detail our code but to explain how to efficiently approximate the solution to the Henssge equation.

To solve Henssge’s double exponential equation that models physical cooling of a body, it is sufficient to determine a difference term of the equation that will be close to zero for the correct time of death using a discrete set of all sensible possible solutions given that the modelled time frame has practical upper limits. Best post-mortem interval approximation yields minimal difference between equation terms 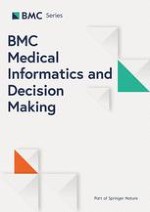 Knowledge, attitude, and use of mHealth technology among students in Ghana: A university-based survey

Automatically determining cause of death from verbal autopsy narratives

Correction to: The past, present and future of opioid withdrawal assessment: a scoping review of scales and technologies