To determine if polyp detection at computed tomographic colonography (CTC) is associated with (a) the number of CTC examinations interpreted per day and (b) the length of time spent scrutinising the scan.

Retrospective observational study from two hospitals. We extracted Radiology Information System data for CTC examinations from Jan 2012 to Dec 2015. For each examination, we determined how many prior CTCs had been interpreted by the reporting radiologist on that day and how long radiologists spent on interpretation. For each radiologist, we calculated their referral rate (proportion deemed positive for 6 mm+ polyp/cancer), positive predictive value (PPV) and endoscopic/surgically proven polyp detection rate (PDR). We also calculated the mean time each radiologist spent interpreting normal studies (“negative interpretation time”). We used multilevel logistic regression to investigate the relationship between the number of scans reported each day, negative interpretation time and referral rate, PPV and PDR.

Five thousand one hundred ninety-one scans were interpreted by seven radiologists; 892 (17.2%) were reported as positive, and 534 (10.3%) had polyps confirmed. Both referral rate and PDR reduced as more CTCs were reported on a given day (p < 0.001), the odds reducing by 7% for each successive CTC interpreted. Radiologists reporting more slowly than their colleagues detected more polyps (p = 0.028), with each 16% increase in interpretation time associated with a 1% increase in PDR. PPV was unaffected.

Reporting multiple CTCs on a given day and rapid CTC interpretation are associated with decreased polyp detection. Radiologists should be protected from requirements to report too many CTCs or too quickly.

• CT colonography services should protect radiologists from a need to report too fast (> 20 min per case) or for too long (> 4 cases consecutively without a break).
• Professional bodies should consider introducing a target minimum interpretation time for CT colonography examinations as a quality marker. 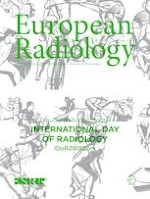 Intra- and inter-operator reproducibility of US point shear-wave elastography in various organs: evaluation in phantoms and healthy volunteers

Relevance of anatomical, plaque, and hemodynamic characteristics of non-obstructive coronary lesions in the prediction of risk for acute coronary syndrome