The aim of the present technical note was to describe a prosthetic technique developed to increase the predictability of immediately loaded implants supporting a fixed prosthesis after computer-aided template-guided flapless implant placement.

During a 2-year period, eight patients presenting partial edentulism underwent computer-aided template-guided implant placement. The presented technique was used during the prosthetic procedures to directly transfer the data obtained with the facebow to the surgical environment, allowing for accurate repositioning of the temporary prosthesis on the implants as previously planned with the digital software.

A total of 78 dental implants were immediately loaded with an implant-supported fixed prosthesis after flapless template-guided implant placement. A survival and success rate of 100 % was reported after a mean follow-up of 1 year from the prosthetic loading. Neither major complications nor dropouts were observed during the healing time. From both clinical and radiological evaluations, implants appeared stable with no signs of soft tissue inflammation or infection and no evidence of pathological peri-implant bone resorption.

The proposed technique associated with computer-aided implant placement and immediate loading protocol provided a high implant and prosthetic survival and success rate. No complications were reported during the recalls, suggesting predictability and reliability of the present technique over a short-term period. 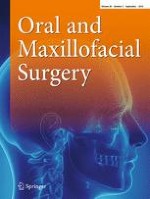 Osteochondrosis dissecans of the temporomandibular joint: a case report and a review of literature