Congenital granular cell epulis (CGCE), a rare benign lesion arising from the mucosa of the alveolar ridges of the jaws in newborns, has a clinical course characterized by lack of further growth after birth. Histomorphologically, it resembles a granular cell tumor (GCT) of the adult. The histogenesis of this lesion is unclear. We submitted a series of five CGCEs to a large panel of antibodies in order to trace the origin of the constituent granular cells. The resultant immunohistochemical profile showed positivity of these cells to vimentin, NKI/C3, and PGP9.5. This does not confirm any particular cell type for the histogenetic origin of CGCE but may rather reflect a local metabolic or reactive change, providing supporting evidence that the lesion is of a non-neoplastic nature. In addition, the granular cells were non-reactive for S-100, NGFR/p75, and inhibin-α, which further contributes to the distinction between a CGCE and the adult GCT. 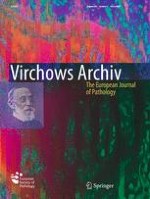 Dendritic cell sarcomas/tumours of the breast: report of two cases