It has been reported that, by the age of 80, the risk of women to undergo surgery for the treatment of pelvic organ prolapse (POP) exceeds 10%, a percentage expected to increase with the rise in life expectancy. The vaginal approach for POP reconstructive operations is associated with fewer complications and results in a shorter rehabilitation period than the abdominal route, whereas hysterectomy is widely performed concomitantly whenever the uterus is significantly prolapsed. However, there is no clear evidence supporting the role of hysterectomy in improving surgery outcome. We present our experience with a new minimally invasive procedure—the posterior intravaginal slingplasty (PIVS) for correction of advanced uterine prolapse—at the same time, comparing additive vaginal hysterectomy to uterine preservation, to evaluate the therapeutic significance of hysterectomy when vaginal apical prolapse is reconstructed with PIVS. Seventy-nine women presenting with moderate to severe uterine prolapse were enrolled into the current PIVS study. Vaginal hysterectomy was concomitantly performed upon patient’s request (44 patients), whereas those wishing to preserve their uterus underwent reconstructive surgery only (35 patients). No intraoperative or postoperative major complications were recorded during an average follow-up of 29.8 months: One patient (1.3%) presented with surgical failure, whereas 71 (89.9%) of the operated patients reported satisfaction with the therapeutic results. Bladder overactivity symptoms declined from three thirds of the patients preoperatively to below 10% postoperatively. Ten (12.7%) patients had vaginal tape protrusion; all underwent segmental tape resection at the out-patient clinic. Because the PIVS procedure does not require either laparotomy or deep transvaginal dissection, as previously required for operative intervention, the hospitalization period was relatively short: 4.2 days for the hysterectomy group and 1.5 for the non-hysterectomy group. Other statistically significant differences between the hysterectomy and non-hysterectomy groups were the average ages (63.5 vs 51.0 years, respectively) and concomitant surgery (87% vs 69%, respectively, the higher percentage due to additive amputation of elongated uterine cervices). No other significant differences were recorded. The current results support the previously reported efficacy, safety, and simplicity of the PIVS procedure as well as the legitimacy of uterine preservation. Moreover, unstable bladder symptoms were found to be improved after this operation. However, long-term data are required to be able to draw solid conclusions concerning the superiority of the discussed operation. 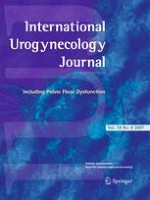 “The effect of vaginal and caesarean delivery on lower urinary tract symptoms: what makes the difference?”: reply to comment by Mahajan et al.

Is the role of Burch colposuspension fading away in this epoch for treating female urinary incontinence?

Vaginal pressure during daily activities before and after vaginal repair