Bowel disturbances have been identified as the most important risk factor for fecal incontinence (FI). However, few studies have evaluated the impact of fiber supplementation. Our aim was to assess the correlation between the improvement in stool consistency by fiber supplementation and the changes in urgency and number of FI episodes and in the QoL of patients with FI.

Eighty-three patients who came to our institution with FI and/or fecal urgency associated with loose stools or diarrhea were prospectively included in the study The intervention included dietary advice and methylcellulose 500 mg every 8 h for 6 weeks. All assessments were carried out at baseline and 6 weeks after the start of the intervention, and included a Bristol Stool Scale, a 3-week bowel diary, the St Mark’s score, the Fecal Incontinence Quality of Life scale (FIQL) and a bowel satisfaction score.

Sixty-one patients completed the study. At baseline 50 reported episodes of urge incontinence, while 11 did not report FI episodes because they rarely left home to avoid leakage. The Bristol score improved to normal stools in 65.6% of patients after treatment. Bowel diaries showed a statistically significant reduction in the number of bowel movements, urge episodes, urge fecal incontinence episodes and soiling per week. The St Mark’s score and the bowel satisfaction score significantly improved after methylcellulose and overall deferment time also increased. FIQL significantly improved in two subdomains (lifestyle, coping/behavior). Thirty-one patients (51.7%) were discharged with methylcellulose as the only treatment. 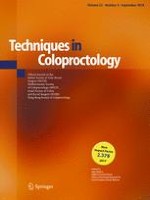 Preoperative surgical planning based on cadaver simulation and 3D imaging for a retrorectal tumour: description and video demonstration

Correction to: Long-term results after stapled hemorrhoidopexy: a survey study with mean follow-up of 12 years

Use of robotic technology: a survey of practice patterns of the ASCRS Young Surgeons Committee

Long-term results after stapled hemorrhoidopexy: a survey study with mean follow-up of 12 years