Pain is the most debilitating symptom of recurrent acute pancreatitis (RAP) and chronic pancreatitis (CP) and often requires chronic opioids or total pancreatectomy with islet autotransplantation to manage. Pain is a complex experience that can be exacerbated by depression and vice versa. Our aim was to test the hypothesis that depression-associated genes are associated with a constant-severe pain experience in RAP/CP patients.

A retrospective study was done using North American Pancreatitis Study II (NAPS2) genotyped RAP and CP patients with completed case report forms (n = 1,357). Subjects were divided based on pattern of pain and pain severity as constant-severe pain (n = 787) versus not constant-severe pain (n = 570) to conduct a nested genome-wide association study. The association between reported antidepressant medication use and depression gene loci was tested.

Constant-severe pain was reported in 58% (n = 787) of pancreatitis patients. No differences in sex or alcohol consumption were found based on pain severity. Antidepressant use was reported in 28% (n = 223), and they had lower SF-12 mental quality of life (MCS, p < 2.2 × 10− 16). Fifteen loci associated with constant-severe pain (p < 0.00001) were found to be in or near depression-associated genes including ROBO2, CTNND2, SGCZ, CNTN5 and BAIAP2. Three of these genes respond to antidepressant use (SGCZ, ROBO2, and CTNND2).

Depression is a major co-factor in the pain experience. This genetic predisposition to depression may have utility in counseling patients and in instituting early antidepressant therapy for pain management of pancreatitis patients. Prospective randomized trials are warranted. 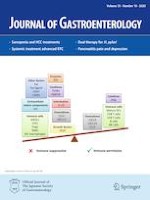 Clinical impact of vonoprazan-based dual therapy with amoxicillin for H. pylori infection in a treatment-naïve cohort of junior high school students in Japan