Visual information of similar nodules could assist the budding radiologists in self-learning. This paper presents a content-based image retrieval (CBIR) system for pulmonary nodules, observed in lung CT images. The reported CBIR systems of pulmonary nodules cannot be put into practice as radiologists need to draw the boundary of nodules during query formation and feature database creation. In the proposed retrieval system, the pulmonary nodules are segmented using a semi-automated technique, which requires a seed point on the nodule from the end-user. The involvement of radiologists in feature database creation is also reduced, as only a seed point is expected from radiologists instead of manual delineation of the boundary of the nodules. The performance of the retrieval system depends on the accuracy of the segmentation technique. Several 3D features are explored to improve the performance of the proposed retrieval system. A set of relevant shape and texture features are considered for efficient representation of the nodules in the feature space. The proposed CBIR system is evaluated for three configurations such as configuration-1 (composite rank of malignancy “1”,“2” as benign and “4”,“5” as malignant), configuration-2 (composite rank of malignancy “1”,“2”, “3” as benign and “4”,“5” as malignant), and configuration-3 (composite rank of malignancy “1”,“2” as benign and “3”,“4”,“5” as malignant). Considering top 5 retrieved nodules and Euclidean distance metric, the precision achieved by the proposed method for configuration-1, configuration-2, and configuration-3 are 82.14, 75.91, and 74.27 %, respectively. The performance of the proposed CBIR system is close to the most recent technique, which is dependent on radiologists for manual segmentation of nodules. A computer-aided diagnosis (CAD) system is also developed based on CBIR paradigm. Performance of the proposed CBIR-based CAD system is close to performance of the CAD system using support vector machine. 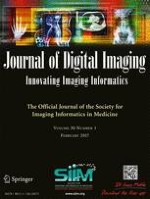 Does Expectation of Abnormality Affect the Search Pattern of Radiologists When Looking for Pulmonary Nodules?

Review of Radiology: App for Android by the Radiological Society of North America (RSNA)