Humanitarian assistance standards mandate specific attention to address the sexual and reproductive health (SRH) needs of conflict-affected populations. Despite these internationally recognised standards, access to SRH services is still often compromised in conflict settings. CARE in collaboration with the RAISE Initiative strengthened the Ministry of Health (MOH) to provide contraceptive services in Maniema province, Democratic Republic of the Congo. This study evaluated the effectiveness of this support for MOH health facility provision of contraception.

Cross-sectional surveys in 2008 (n = 607) and 2010 (n = 575) of women of reproductive age using a two-stage cluster sampling design were conducted in Kasongo health zone. Facility assessments were conducted to assess the capacity of supported government health facilities to provide contraceptive services in 2007 and 2010. Data on the numbers of clients who started a contraceptive method were also collected monthly from supported facilities for 2008–2014.

Current use of any modern contraceptive method doubled from 3.1 to 5.9% (adjusted OR 2.03 [95%CI 1.3–3.2]). Current use of long-acting and permanent methods (LAPM) increased from 0 to 1.7% (p < .001), an increase that was no longer significant after adjustment. All current users except a few condom users reported a health facility as the source of the method. The 2010 facility assessments found that most supported facilities had the capacity to provide short-acting and long-acting methods. Service statistics indicated that the percentage of clients who accepted a long-acting method at supported facilities increased from 8% in 2008 to 83% in 2014 (p < .001). 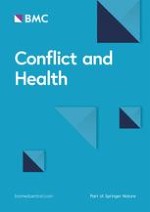 Measurement invariance of the Hopkins Symptoms Checklist: a novel multigroup alignment analytic approach to a large epidemiological sample across eight conflict-affected districts from a nation-wide survey in Sri Lanka

Family planning in refugee settings: findings and actions from a multi-country study

The role of public health information in assistance to populations living in opposition and contested areas of Syria, 2012–2014