We conduct this study to evaluate the clinical and functional impact of Nitric Oxide Synthase 3 (NOS3) T-786C and G894T genetic variants on nasopharyngeal carcinoma (NPC) risk and progression in a Tunisian population.

259 NPC patients and 169 healthy controls were enrolled into our case–control study. Blood samples were genotyped by the RFLP-PCR analysis. The levels of Nitric oxide (NO) were measured by a colorimetric assay kit in the plasma of NPC patients, healthy controls and according to NOS3 genotypes. The correlation between the NOS3 variants and the clinicopathological parameters was examined.

We found no linkage disequilibrium between NOS3 T-786C and G894T variants. These results showed that NOS3 variants were genetically independent. In contrast to NOS3 T-786C, a significant association was found between NOS3 G894T polymorphism and NPC risk. The 894T allele decreased significantly in NPC patients and appeared as protective factor (OR = 0.65, CI 95%= 0.48–0.88, p = 0.006). NPC patients had significantly higher levels of plasma NO as compared to healthy controls (p = 0.0011). The T-786C mutation reduced the levels of plasma NO and decreased risk of lymph node metastasis in NPC patients (OR = 0.64, 95% CI = 0.43–0.96; p = 0.03). In contrast, NOS3 G894T polymorphism had no effects neither on NO plasma levels nor clinical parameters.

This is the first study to associate NPC with significantly higher levels of plasma NO. NOS3-derived NO could play key roles in NPC pathogenesis. NOS3 variants differently contribute to NPC risk and progression in a Tunisian population. NOS3 G894T was associated with NPC risk. NOS3 T-786C decreased the levels of plasma NO and reduced the development of regional lymph node metastasis. 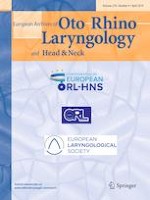 Rising incidences of Warthin’s tumors may be linked to obesity: a single-institutional experience

Syndromes that predispose to epistaxis

A prospective, non-randomized evaluation of a novel low energy radiofrequency treatment for nasal obstruction and snoring