Clock genes are components of the molecular clock. Their malfunction is thought to increase the risk of numerous diseases, including cancer. Vascular endothelial growth factor (VEGF) has a pivotal role in angiogenesis, and its expression levels are controlled by clock genes in tumor cells. Ophthalmic diseases such as age-related macular degeneration, proliferative diabetic retinopathy, and neovascular glaucoma are also associated with abnormal angiogenesis followed by upregulation of VEGF in the eye. In the present study, we aimed to uncover the relationship between clock genes and VEGF in the eye. 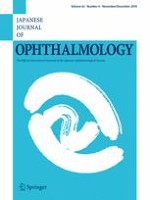 Causes, background, and characteristics of binocular diplopia in the elderly