Type 2 diabetes mellitus (T2DM) and obesity are both related to increased risk of cardiovascular disease and mortality. Early atherosclerotic vascular changes can be detected by non-invasive tests like carotid artery intima-media thickness (cIMT) and pulse wave velocity (PWV). Both cIMT and PWV are significantly impaired in T2DM patients and in obese patients, but the additional effect of T2DM on these vascular measurements in obese subjects has not been evaluated.

Two hundred morbidly obese patients with or without T2DM were enrolled in a prospective cohort study and underwent extensive laboratory testing, including cIMT and PWV measurements. The cohort was divided into a group with and a group without T2DM.

Within this cohort, 43 patients (21.5%) were diagnosed with T2DM. These patients were older and had more often (a history of) hypertension as compared to patients without T2DM. HbA1c levels were significantly increased, while LDL cholesterol was significantly lower and the use of statins higher than in non-diabetic participants. cIMT and PWV were significantly increased in subjects suffering from T2DM. The variability in cIMT and PWV was related to differences in age and systolic blood pressure, but not to the presence of T2DM.

While T2DM negatively affects the vasculature in morbid obesity, hypertension and age seem to be the major risk factors, independent from the presence of T2DM. 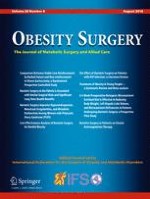 Is the Sleeve Gastrectomy Always a Better Procedure? Five-Year Results from a Retrospective Matched Case-Control Study

Attrition after Acceptance onto a Publicly Funded Bariatric Surgery Program