It is well established that endurance performance is negatively affected by environmental heat stress due to a complex interaction of physical, physiological and psychological alterations. Numerous scientific investigations have attempted to improve performance in the heat with pre-cooling (cooling prior to an exercise test), and as such this has become a well-established ergogenic practice for endurance athletes. However, the use of mid-cooling (cooling during an exercise test) has received considerably less research attention in comparison, despite recent evidence to suggest that the advantage gained from mid-cooling may outweigh that of pre-cooling. A range of mid-cooling strategies are beneficial for endurance performance in the heat, including the ingestion of cold fluids and ice slurry, both with and without menthol, as well as cooling of the neck and face region via a cooling collar or water poured on the head and face. The combination of pre-cooling and mid-cooling has also been effective, but few comparisons exist between the timing and type of such interventions. Therefore, athletes should experiment with a range of suitable mid-cooling strategies for their event during mock competition scenarios, with the aim to determine their individual tolerable limits and performance benefits. Based on current evidence, the effect of mid-cooling on core temperature appears largely irrelevant to any subsequent performance improvements, while cardiovascular, skin temperature, central nervous system function and psychophysiological factors are likely involved. Research is lacking on elite athletes, and as such it is currently unclear how this population may benefit from mid-cooling. 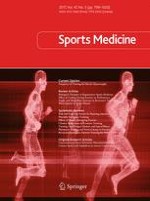 Effect of Plyometric Training on Vertical Jump Performance in Female Athletes: A Systematic Review and Meta-Analysis