DACCORD is an observational study in patients with COPD recruited across Germany following initiation or change in COPD maintenance medication. Data collected include COPD Assessment Test (CAT) total score on entry and after 1 and 2 years, and the occurrence of exacerbations. We analysed the correlation between change from baseline in CAT total score and exacerbations, after excluding patients who exacerbated during the quarter immediately prior to the CAT assessment of interest.

The initial correlation analysis was performed in 6075 patients, 28% with ≥ 1 exacerbation over the 2-year follow-up, and 58% with a clinically relevant CAT improvement. There was a significant correlation between exacerbations over 2 years and CAT change from baseline at Year 2 (p = 0.0041). The Spearman’s correlation coefficient was 0.03711, indicating very weak correlation—potentially driven by the high proportion of non-exacerbating patients. In a subsequent logistic regression, the probability of experiencing frequent (≥ 2 per year) or severe exacerbations was higher in patients with worsening in CAT total score (p < 0.001). However, the probability of a patient exacerbating in Year 1 or Year 2 did not correlate with CAT change.

In this population (initiating or changing maintenance COPD medication), patients with frequent or severe exacerbations had a long-term worsening in health status (beyond the acute effect of an exacerbation) compared with patients who do not exacerbate. 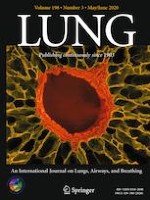 Prevalence and Mortality of Pulmonary Hypertension in ESRD: A Systematic Review and Meta-analysis

Incidence and Risk of Pneumococcal Pneumonia in Adults with Distinct Underlying Medical Conditions: A Population-Based Study