Idiopathic inflammatory myopathies (IIM) are a group of systemic autoimmune disorders primarily affecting skeletal muscle. Juvenile Dermatomyositis (JDM) is the most common childhood IIM, making up approximately 85% of cases [ 1]. It has a reported annual incidence of 2.5–4 cases per one million children, with a peak incidence of 5–10 years old. Females are affected at least twice as often as males [ 2, 3]. Multiple other organ systems may be involved; cardiovascular manifestations are less common compared to other organ systems. The current literature describes accelerated atherosclerosis and coronary artery disease, conduction abnormalities, and ventricular dysfunction as the most common cardiac complications of IIM [ 4– 6]. To our knowledge, there is no report of IIM associated with coronary artery dilation. We present a unique case of an adolescent with IIM, anti-synthetase syndrome, and coronary artery dilation.

The anti-PL-12 antibody is one of the eight myositis-specific autoantibodies directed against aminoacyl-tRNA synthetases, associated with the anti-synthetase syndrome. This syndrome consists primarily of interstitial lung disease in addition to myositis, arthritis, Raynaud’s phenomenon, skin rashes, “mechanic’s hands,” and constitutional symptoms such as fever [ 7]. There is limited information on cardiac involvement in the anti-synthetase syndrome [ 8]. A 2011 systematic review evaluating patients with IIM with cardiac involvement had noted that it is an important cause of morbidity and mortality. The authors noted that 68 patients had pathology with 5 patients had small vessel disease and 2 patients had coronary sclerosis. Of all patients with echocardiogram findings, none were reported having coronary dilation [ 9]. Further, an analysis of the National Inpatient Sample by Silverberg et al. detailed the cardiovascular comorbidities associated with JDM — coronary artery disease was classified as one of the disorders that had no or too infrequent occurrences to allow for analysis [ 10].
Anzeige
It would be critical to consider other possibilities in the differential diagnosis. There is an extended rheumatologic differential diagnosis for coronary artery enlargement in pediatrics. Incomplete Kawasaki Disease (KD) was considered as he had fever> 5 days, and feet swelling without oral/mucosal changes, polymorphous rash, conjunctivitis, or cervical adenopathy. However, his age, and clinical phenotype of muscle disease, interstitial lung disease, Raynaud’s phenomenon and (+) PL-12 antibody would be inconsistent with KD. The quick resolution of his coronary dilation, given the length of time of his disease process also makes KD less likely.
Conversely, non-KD febrile illnesses associated with coronary artery dilation is noted in pediatric patients and has been noted in a variety of inflammatory and infectious causes such as systemic Juvenile Idiopathic Arthritis (JIA), Henoch Schonlein Purpura, Epstein Barr Virus, and rickettsial disease [ 11– 14]. In a pilot prospective study evaluating pediatric patients with daily fevers > 38 °C, the authors found that in non-KD febrile patients had Z scores ranging from 2 to 2.5. Among the 43 febrile non- KD patients, 37% of the diagnosis were bacterial, 47% viral, and 16% unknown [ 15]. In our patient, z-scores were higher at 3.1 and 4.2 for the LAD and LMCA respectively, suggestive that his coronary artery dilation was unlikely related to infectious cause. For our patient, systemic JIA was less likely given the lack of organomegaly, evanescent rash, leukocytosis or pericarditis.
Coronary dilation, including giant aneurysms, is a well-documented, but uncommon finding in Takayasu’s Arteritis [ 16– 18]. Our patient did not have any evidence for hypertension, claudication- type symptoms, or reduced pulses. In addition, there were no other findings on echocardiogram to suggest extended aortitis.
It is notable that his coronary dilation does not fully explain his symptoms that prompted the cardiac work up at the initial admission. Yet, it may be important to consider characterizing the cardiac phenotype of patients who present with JDM. Recently, a retrospective review of a Canadian cohort noted that in a large cohort of 52 patients with JDM, cardiac findings are common at the presentation of JDM. None of the patients were reported to have coronary dilation. The authors concluded that cardiac abnormalities were not necessarily from the disease process. However, they recommended cardiac evaluation on all patients presenting with JDM given the high number of cardiac findings and known long term cardiac dysfunction long term [ 5, 19].
In sum, we report a unique case of an adolescent with IIM, antisynthetase syndrome and coronary artery dilation. Patients with coronary artery dilation are at increased risk for thrombosis and, less commonly, rupture. It would be important to continue with research and investigation to better characterize the cardiac complications for patients with IIM.

The authors received no funding.

The authors obtained consent for publication from the patient and parent. 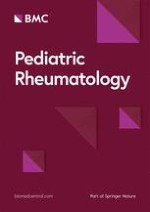 Henoch-Schönlein Purpura in children: not only kidney but also lung

The effects of TNF-alpha inhibitor therapy on the incidence of infection in JIA children: a meta-analysis

Pain, functional disability, and their Association in Juvenile Fibromyalgia Compared to other pediatric rheumatic diseases

Heavy metals in fish and its association with autoimmunity in the development of juvenile idiopathic arthritis: a prospective birth cohort study